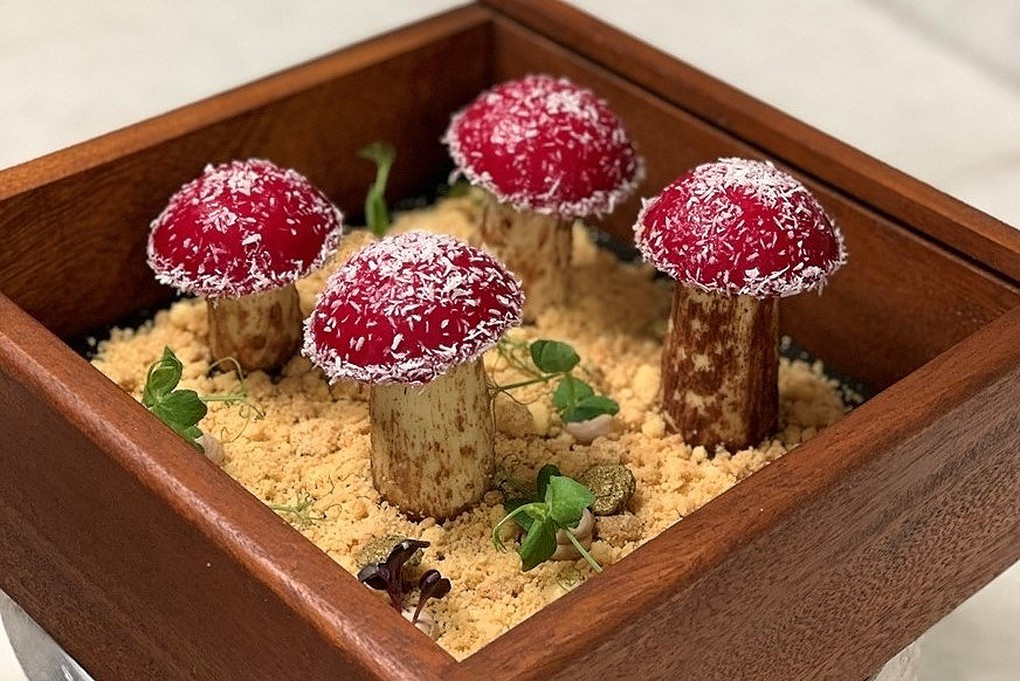 Ahmed Nishadh, from Fuvahmulah, started his journey in the culinary industry after completing his apprenticeship programme at Four Seasons in 2009. He later joined Four Seasons Landaa Giraavaru as a commis-chef and after a tremendous 5 years of gaining expertise in different areas of the kitchen, he made the move to Huvavenfushi in 2015 where he worked for 3 years, and got the opportunity for the pre-opening of Lux North Male atoll.

Since the overall operation is slow in the resort due to COVID-19 and he had plenty of free time during the day, he decided to present something new as a turndown amenity for one of the VVIPs on the island, taking inspiration from one of the best pastry chef and chocolatier in the world Chef Amaurey Guichen. Since some of the equipments required were not available for the recipe, he had to improvise in some ways. Here is the recipe for the unique Red Mushroom dessert.

• Scale strawberry puree and lemon juice into a pot and bring to simmer.

• Meanwhile scale sugar and pectin in a small bowel.

• Once the puree starts to simmer add in the sugar and pectin while whisking consistently.

• Strain into a container, contact wrap and let it set in the chiller for minimum 12 hours.

• When it s ready, blend it with a hand blender until smooth.

• Add in the freshly diced berries to the fruit gel and mix.

• Pour into a preferred mold and let it set in the freezer.

• Soak the gelatin sheet in cold water meanwhile, melt the white chocolate to 40c and set aside.

• Scale Cream and pistachio paste into a pot and bring to boil.

• Let the chocolate mixture sit for a while to cool down to approximately 30-40c. Add in 1/4 of whipped cream start folding slowly with a spatula, mix a little bit and add in another half of the cream and fold with spatula. Add last remaining amount of the cream and finish the mousse.

• Pour into a desired mold and let it set in the freezer.

• Soak the gelatin in cold water.

• Boil the purée and sugar together.

• Drain the gelatin out the water and add into the puree and mix well, making sure of the gelatin is melted well.

• Strain and pour into a desired mold to set in the freezer.

• Boil half of the cream with tonka beans together and let it infuse for at least 8hours.

• Soak the gelatin in cold water.

• Boil the cream and sugar and add the soaked gelatin after draining it from water. (mix well making sure of the gelatin in melted)

• Mix in with the infused cream and strain into a container.

• Contact wrap and let it set in the chiller for at-least 12 hours before use.

• To use transfer the ganache into a kitchen-aid mixer and whisk until soft peak.

• Whisk the egg yolk and sugar until fluffy in a kitchen-aid mixer. Replace the whisk with the paddle and start mixing by adding the butter slowly about a spoon at a time.

• Add vanilla extract following with all the dry items, mix just enough for the flour to be incorporated with the butter.

• Remove from the mixing bowl, clean wrap and keep in the chiller for about and hour.

• Once the dough is cold enough to roll, take out and sheet in between 2 silicone baking mats to the thickness around 3mm (should come to the size of 60cm by 40cm tray).

• Scale all the items together in a kitchen-aid bowel and mix with a paddle.

• Once mixed well enough, spread on a tray and bake at 170c.

• Every 5 mins remove the tray and mix well with a fork and put back in the oven.

• Keep doing this until the crumble gets a golden-brown color. (should take around 15-18 mins).

• Once bake let it cool down put in an airtight container and store in a dry place. (can keep for one month)

• Meanwhile scale the white chocolate and condense milk in to a 2lt jar.

• Once the syrup is ready pour into the chocolate and emulsify with a blender, add the coloring as much needed.

• Store in the chiller for at least 12 hours before use.

• To use heat up in microwave until half liquid, half thick. Blend until desired consistency, with temperature ranging from 29 to 39C.