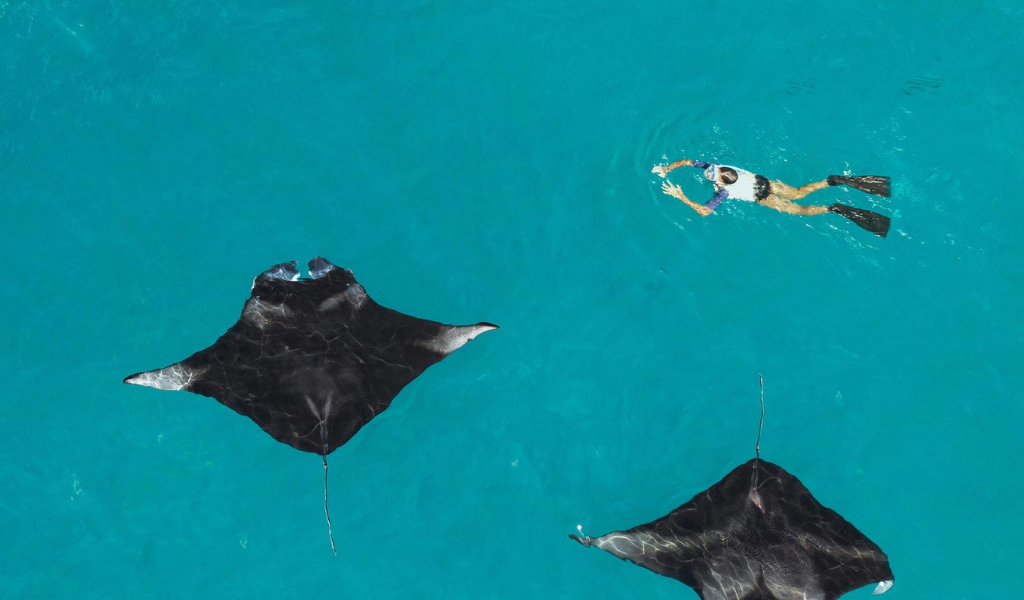 The Westin Maldives Miriandhoo Resort, located on Baa Atoll, the Maldives' first UNESCO Biosphere Reserve, allows visitors to get up close and personal with manta rays in one of the world's largest natural manta feeding sites. Guests enjoy a once-in-a-lifetime opportunity to snorkel with gentle giants in Hanifaru Bay, which is only 18 kilometers from the resort.

With almost 4,900 individuals discovered, the Maldives has the biggest population of researched Manta Rays, including the endangered Oceanic Manta Ray. At Hanifaru Bay, 1800 of these have been documented. The current Manta season began on May 6, 2022, and is projected to last through early November. "During peak season, over 100 Mantas may be seen feeding in the water, and Whale Sharks can be seen, especially during full moon," Sharing her expertise is Ms. Filipa Lopes, the resort's resident Marine Biologist.

Manta rays are one of the most spectacular creatures in the water, with wingspans up to seven meters, speeds up to 24 kilometers per hour, and cognitive function comparable to dolphins. The Maldivian government added all ray species to the list of protected species after classifying them as vulnerable, enhancing the country's position as a pioneer in marine conservation and promoting valuable, sustainable tourism centered on manta populations. Mantas' chances of survival will improve if people are connected to them.

“Climate change can impact these gentle giants’ food source - as it is predicted that the rise in sea temperature will result in decline in zooplankton populations - and a scarcity of food can affect their reproductive ecology, declining manta ray population numbers. Luckily, Maldivian Manta population is one of the best studied in the world and is considered stable ate the moment.” Filipa expressed her concern over the environmental issue.

The Baa Atoll Biosphere Reserve is noted for its rich marine biodiversity and beautiful coral reef, which ensures guests a diverse range of colorful reef fish in every snorkeling experience, including Batfish, Fusiliers, and Anemone Fish, to name a few. Dolphins can frequently be seen from the island, and visitors can get a closer look at them on the resort's regular sunset dolphin boat excursions.

The Westin Maldives Miriandhoo Resort also hosts a weekly Marine Biology program where guests may learn more about the resort's abundant marine life and ask questions to Filipa, who will be more than happy to answer. On this idyllic island, guests can also choose from a variety of fascinating watersport activities and excursions, including Jet Ski rides, turtle snorkeling, and traditional sunset fishing.

This season, The Westin Maldives Miriandhoo Resort has introduced a special package for diving fanatics or anyone interested in getting a firsthand look at the underwater world. This special #PlayWell with Manta Rays package includes a swim with manta rays at Hanifaru Bay, a turtle snorkeling trip, and two scuba diving sessions, one in the house reef and the other in open sea.