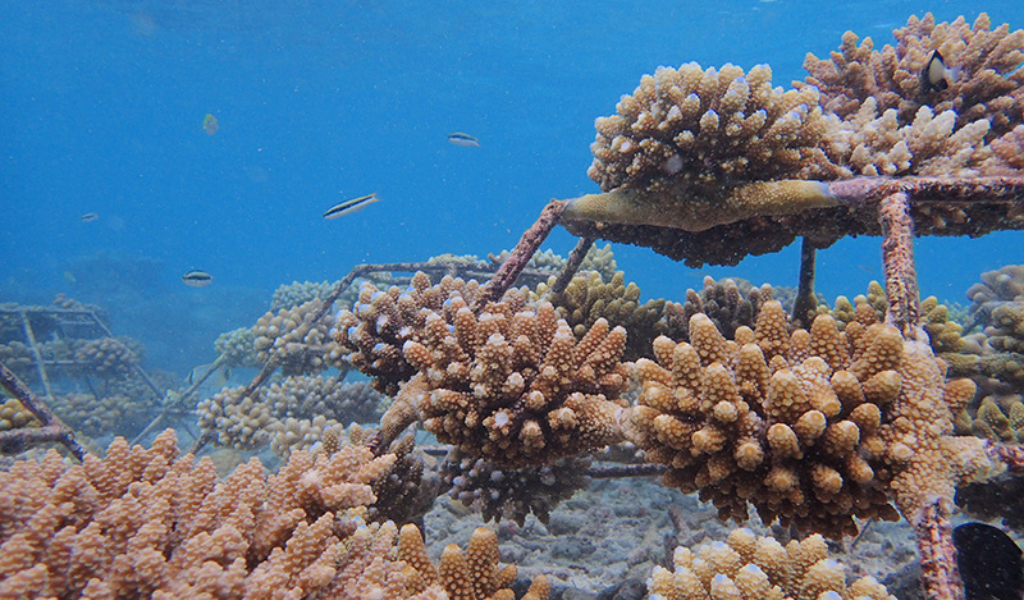 Deemed as the gardens of the sea, coral reefs are teeming with vibrant colours, marine life and of course, divers who visit everyday to see their beauty. However, in recent years due to the devastating repercussions of Global Warming, ocean acidification and pollution, the life of coral reefs all around the world are threatened. In 2016, Maldivian coral reefs faced severe coral bleaching incidents, leaving many resorts to step up in the conservation of these delicate creatures.

At OBLU SELECT Sangeli, a reef conservation program has been put into place since 2019. Their aim is to re-build the coral reefs and restore the lost coral cover. In order to do so, the groundwork of a coral nursery had been laid out using the coral line method. A total of 151 coral fragments were twisted into 7 long ropes, propagated and grown. Moreover, 60 metal frames comprising of 2280 fragments has been placed in prime locations around the resort.

Under the supervision of Marine Biologist, Giorgia Maggioni, the coral nursery has been able to thrive in the past 3 years. This feat has been achieved only through continuous nurturing and monitoring such as removing marine debris and replanting broken coral. Coral colonies on the rope structure is now well-grown and is being transported to the house reef by using a special cement designated for underwater purposes.

With the tireless work of conservation, now the lagoon has returned some of its lush coral cover and colour, bringing with it a plethora of marine life too. Snorkellers visiting the reef can now see a myriad of marine organisms like eagle rays, snappers, sharks and other fish species.

At OBLU SELECT Sangeli, conservation efforts are not restricted to coral reefs only with many other target areas being focused on. Creating awareness is an integral part of conservation and marine talks are organized twice a week to enlighten guests about the flora and fauna of Maldives. Moreover, in-villa televisions also feature innovative videos highlighting safe snorkelling guidelines.

The resort also removes ghost nets from the ocean, releasing tangled animals in nets back to the ocean. From using the colourful nets, ghost bracelets are made and sold to guests, with all the proceedings used to fund coral restoration projects.

Turtle protection is widely carried out at Sangeli too. As a part of protecting the Hawksbill species, the resort initiated a photo identification program. Furthermore, turtle nests and hatchings at the resort are protected and monitored, increasing rate of survival of hatchings.