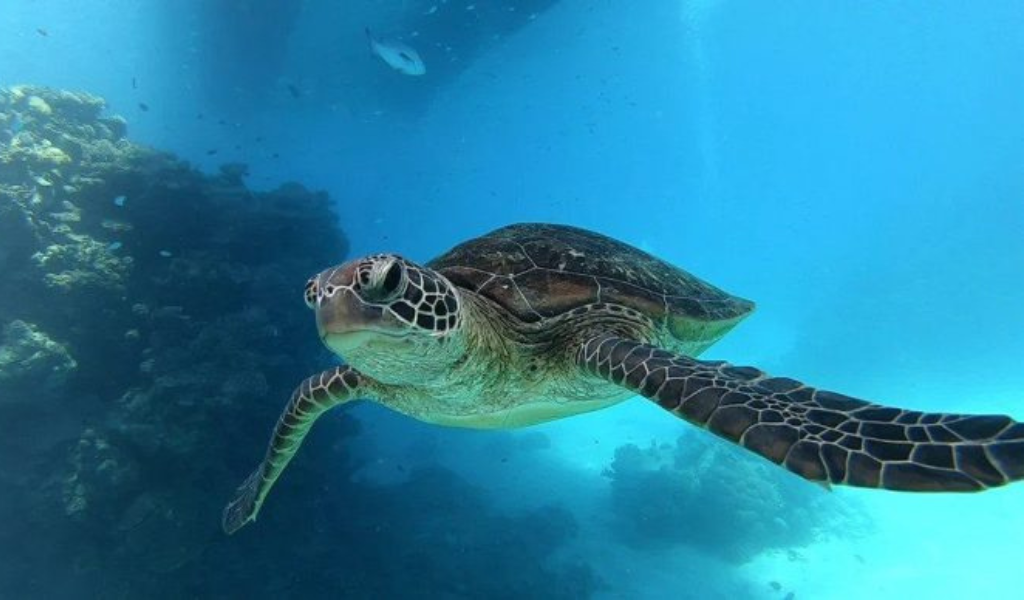 The opulent resort, Amilla Maldives has joined in league with the turtle conservation organization, the Olive Ridley Project to monitor and protect turtles gracing the resort. So far, Amilla Maldives has identified 9 green visitors who regularly make an appearance at the scenic area for feeding and three turtle nests have been sighted at the resort as well.

Although Maldives is frequented by both Green Turtles and Hawksbill Turtles it is rare to find nests of the latter in the country. However, at Amilla Maldives a Hawksbill nest has been located and has been carefully protected by the Olive Ridley members. Moreover, guests have also reported seeing large turtles during their snorkelling excursions in the vast house reef of Amilla, further signifying the presence of turtles at the resort.

Since its inception in 2017, Marine Biologist, Zoe Cox has closely worked with the Olive Ridley Project. Her latest endeavours for the project include submitting ‘Turtle IDs’ and nesting data from the Amilla Maldives Resort. As the pattern of a turtle’s face is unique to each individual much like fingerprints in humans, the photos provide vital data about the turtles. Turtle IDs are produced by taking pictures of both sides of a turtle’s face when spotted in the house reefs or in nesting.

Speaking on this, Zoe elaborated “It’s a great way to monitor populations, migrations, movement and turtle hotspots without physically tagging the turtles and harming them. It’s not even necessary to be a marine biologist to use this simple ‘Turtle ID’ method, you just need a camera”.

The pristine location of Amilla Resort in the midst of a UNESCO Biosphere Reserve means that it is a popular site for turtles to feed, play and nest. The lack of a marine biologist based at the resort posed many difficulties for Amilla in driving conservation efforts of these green visitor however, can now be facilitated through the partnership realized between the Olive Ridley Project and the resort. With a resident marine biologist at the resort, Amilla can now support turtle research and create awareness among guests about the cause such as the detrimental implications of turtle poaching both on the environment and economy.

Zoe explained this by stating “Some species of turtle, such as Green Turtles, graze on seagrass, which is vital for removing carbon from the atmosphere. Some species eat sponge and algae growing on the coral reef, which prevents them from out-competing the coral,” she continues. “And some turtles eat jellyfish, which helps keep their population in check. Their nesting also provides nutrients to the beaches in the form of eggshells and undeveloped eggs.”

Amilla has been in the forefront of turtle protection previously as well. Earlier in 2022, the resort celebrated World Turtle Day by giving guests the chance to sponsor Amilla’s local turtles and pick names for them. Furthermore, little guests are even provided the chance to learn about turtles and other marine life with Amilla’s Mini Marine Biologist programme.