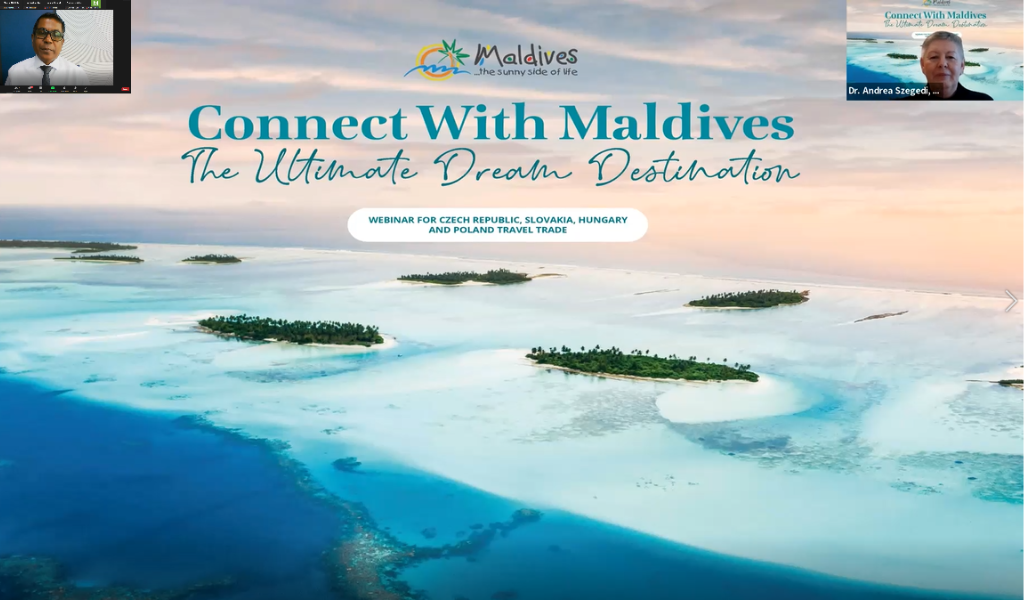 Maldives Marketing and Public Relations Corporation (MMPRC) hosted a webinar to the Eastern European travel trade on Tuesday. Titled ‘Connect with Maldives’ the webinar marks the first of two webinars hosted by the corporation and was participated by representatives from Hungary, the Czech Republic, Poland, Romania and Bulgaria. The second webinar is scheduled to take place on 13th December 2022 with Romanian and Bulgarian travel trade respectively.

The aim of the exclusive webinars is to provide the Eastern Europe travel trade with the latest developments and travel guidelines of the destination as well as provide opportunities for industry partners to market their products to the region. The webinar was immensely successful with over 70 travel trade professionals from Eastern Europe taking part in the event. This was the first time such a webinar series has been conducted in the region to strengthen the Maldivian brand.

The first webinar was inaugurated by an opening speech from the Chief Executive Officer and Managing Director of MMPRC, Mr. Thoyyib Mohamed. During his opening remarks, he reflected on the paramount relationship between the Maldives and the Eastern European travel trade. He then shed light on some of the noteworthy accolades won by the Maldives in the past few years and emphasized the jubilant spirits of the destination as it celebrates the Golden Jubilee Year of Tourism in the Maldives.

Following his speech, the participants were provided an update regarding the latest travel guidelines after which MMPRC showcased the spectacular beauty of the Maldives through a dedicated presentation. In this presentation, the four main products namely resorts, hotels, guesthouses, and liveaboards were highlighted and the bespoke experiences offered in the Maldives were underscored. Among the experiences promoted include the prospect of sleeping in a bubble tent on the beach, vacationing in an over-water villa and even scenic seaplane rides to the resorts.

In addition to this, two industry partners also marketed their products and unique experiences offered at their properties to the travel trade. Through this webinar, MMPRC was able to promote the destination to a broad audience and strengthen relations with the East European market. The webinar was concluded with a Q&A session and an exhilarating raffle holiday giveaway sponsored by Riu Palace Maldives. The lucky winner was awarded an all-inclusive stay in the Maldives!

The Eastern European markets have been rocking the charts for the Maldives with a great number of arrivals originating from the region. As of September 2022, Maldives welcomed 60,115 visitors from Eastern Europe to our shores with some of the markets ranked among the top-source markets for the destination. As such, MMPRC is taking the reins to strengthen brand visibility and destination presence in the region with many activities conducted so far for Eastern Europe. This included joint marketing campaigns with world-renowned airlines as well.