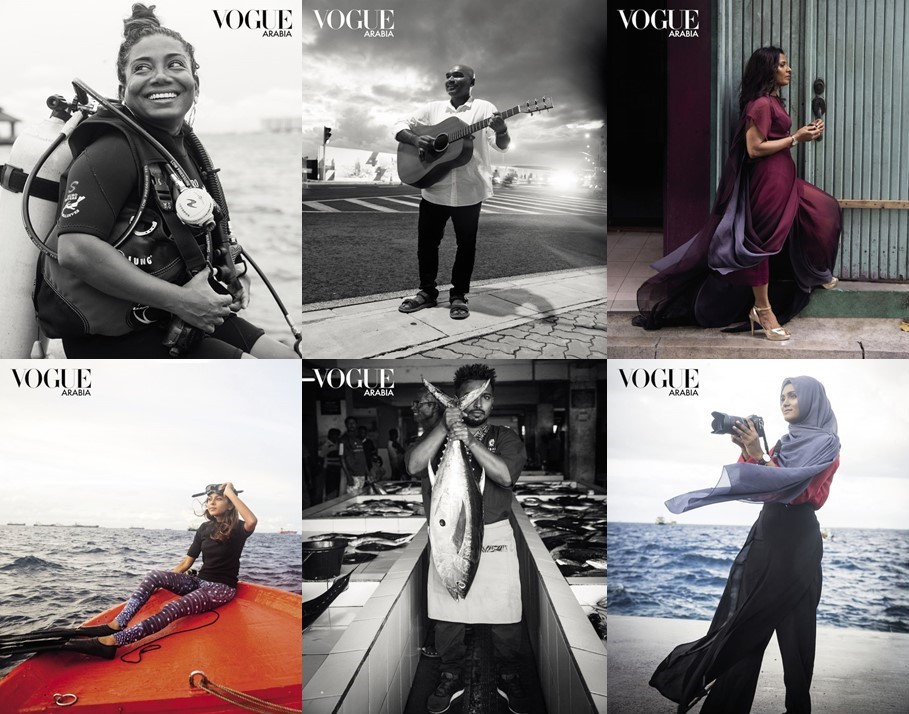 Everyday Heroes of the Maldives by Vogue

Everyday Heroes of the Maldives by Vogue

The country has no limits, its small size is no barrier to success.

Apart from crystal waters, white-powder beaches and world’s lushest corals, the small Maldives is blessed with natives highly talented and passionate. These faces are an example to the world- the modern Maldivians.

Shaziya Saeed spends her days training young girls to dive and educating locals and tourists on how to become more eco-friendly. The ocean lover starts her day surfing before sunrise, considering it her “daily workout.” Last year, Saeed was part of a group of four women who embarked on a 100km stand-up paddle boarding journey around Baa Atoll to spread awareness about ocean health. “We were exploring the threats faced by the environment and marine life from plastic pollution, ghost fishing gear, and climate change,” Saeed says. “We paddled on stand-up boards around Baa Atoll, stopping at different islands and resorts, running beach cleanups, hosting talks at schools, and giving presentations.” The following October, Saeed received the National Award in the field of diving.

Born and raised in Malé, Mohamed Shiuz is an island superstar, known among his fans as “Legend.” He grew up in a musical household, with his father a keyboardist in a local band, and recorded his first single at 14. He’s gone on to perform in Sri Lanka, India, and Malaysia. True to his island roots, Shiuz’s music features reggae influences with a generous helping of traditional Maldivian drums, known as Boduberu. “Being a musician in the Maldives comes with its perks,” he says. “You never know who you’ll cross paths with. I was surprised to find out afterwards that I’ve performed for Chris Martin, Roger Federer, and John Legend.”

“I first got inspired by Flickr when the internet arrived on my island, Hithadhoo, in 2008,” Aishath Naj explains. Originally from the southernmost atoll in the Maldives, Naj has come a long way since being told that photography couldn’t be a career. Today, she is often commissioned for weddings, events, and international publications. “People who haven’t met me often assume I’m a man, which shows how the profession here is very male-dominated,” she shares. “Women are currently underrepresented in the Maldives, though traditionally Dhivehi women have always been strong and independent. Equal representation of women in photography and a female perspective is essential if the pictures we see are to tell the whole story of the world around us.”

When Ahmed Fatheen was a three-year-old on the northern atoll of Shaviyani in Foakaidhoo, he hopped on his father’s small fishing boat as his “co-pilot.” That day was the beginning of his education in the art of fishing, the island nation’s oldest trade and now a booming industry, as well as cooking. Today, he is one of the country’s most successful chefs and restaurateurs. Working his way from being a kitchen helper at a resort to a senior sous chef, Fatheen currently stands at the helm of the Maldives’ first Japanese fusion restaurant, Oishii-The House of Sushi, which he opened in 2018. “A standout mentor for me was chef Kato, a true genius of the Japanese cuisine industry and one of the rare ones licensed to work with toxic fish like the pufferfish,” he shares. “During my tenure with him, he drilled me so hard daily that it left me in tears at the end of many of my shifts. Today, I am glad for those tears as it made me into the man I am today.”

With more than three decades of experience in dressmaking, self-made seamstress and designer Shamla specializes in the full range of womenswear, from wedding gowns to casual dresses. “I have been designing clothes and sewing all my life,” she says, owing most of her inspiration to her mother, “who could sew up anything within an hour.” In 2018, Shamla received the Women on Boards award for best woman CEO in the private sector, as well as the National Award in the field of applied arts. She also owns and runs her namesake fashion boutique in the heart of Malé, called Sham’s.

The brothers behind local clothing brand Toddy Inc started their venture from humble beginnings in 2009. “With no financial backup, it was a bit difficult to do this on a large scale and compete with the already established souvenir shops who have been printing T-shirts for the tourism market for almost 40 years,” Riyaz says. But they persevered, and in 2013, Toddy became the first 100% organic apparel brand in the Maldives. Toddy Inc makes everything from sustainable T-shirts to coconut oil using traditional island motifs of corals and underwater gradients, “depicting modern narratives of Maldivian nature and heritage.

Iru Zareer works as an outreach coordinator at the Maldives Whale Shark Program, where she studies the whale shark population in South Ari atoll, manages its database, and collates information from the citizen science network. The 24-year-old (seen here in whale shark patterned leggings) has also worked with the Olive Ridley Project for the protection of sea turtles and Reef Check Maldives as an eco diver trainer. “I think there’s a lot of opportunity in marine conservation, regardless of gender,” she says. “Sadly, it’s not a career path most people jump towards, especially women. But I’m hopeful. Even though it was definitely not common a couple of years back, the amount of women who are now seen within this field is definitely increasing, slowly, but surely.”