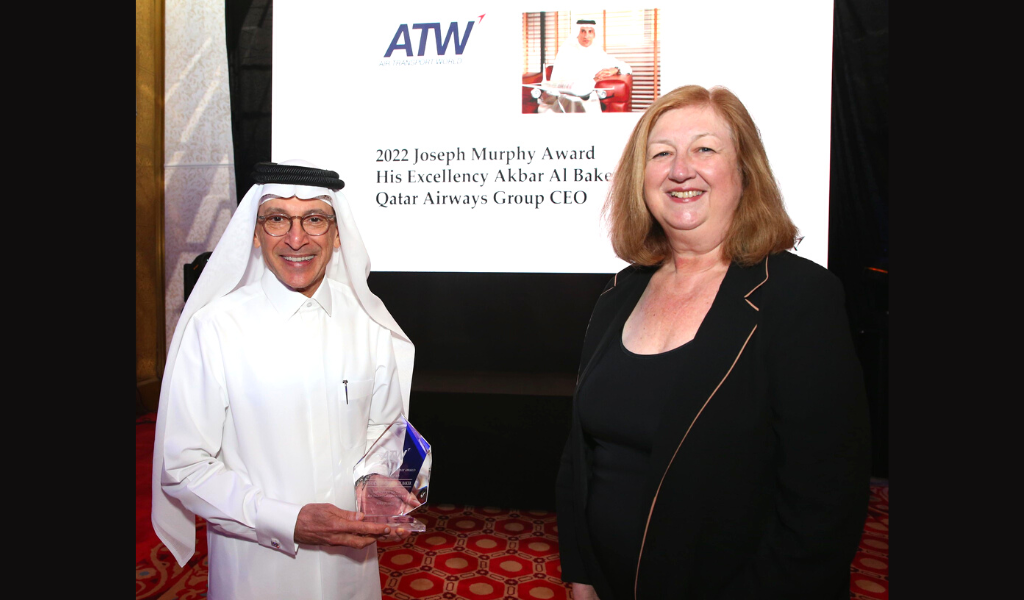 His Excellency Mr. Akbar Al Baker, the Chief Executive of Qatar Airways Group, was presented with the "2022 Joseph Murphy Award" by Air Transport World (ATW), a preeminent online and print trade publication covering the international aviation industry. At the 48th Annual Airline Industry Achievement Awards ceremony, held at the Sheraton Grande Doha Resort and Convention Hotel, he was presented with the honor.

The prestigious honor recognizes Mr. Akbar’s global influence and visionary approach to the aviation sector, demonstrating strategic thinking and innovative direction in guiding the expansion of Qatar Airways' business and the larger aviation sector. His strategic leadership and management are responsible for Qatar Airways' extraordinary success. He has a reputation for being a business innovator who has influenced Qatar's sustainable growth as well as other nations.

“I am truly honored to receive the ‘2022 Joseph Murphy Award’ by Air Transport World. This was made possible by the concerted efforts of everyone in our company, which is a testament to the resilience of our team who weathered the unprecedented times of the pandemic and continued to deliver our promise of excellence in aviation. We are proud to be the leading global airlines serving the world and will continue to connect our customers to the world.” Expressing his gratitude towards the recognition, Mr. Akbar shared his thanks.

One of the most important people in world aviation is Mr. Akbar. With one of the newest and most technologically advanced fleets in the sky, Qatar Airways under his direction became the airline with the fastest rate of growth in the world. Mr. Akbar, a well-known and respected innovator in the industry, is presently a member of the Board of Governors (BoG) of the powerful international aviation industry organization International Air Transport Association (IATA) and chairman of the prestigious oneworld alliance.

Stand a Chance to Win A Free Stay of 6-Nights in an Over-Water Villa! You Read That Right! Previous news
Marriott Resorts in Maldives Celebrates Yoga for Humanity on International Yoga Day 2022 Next news