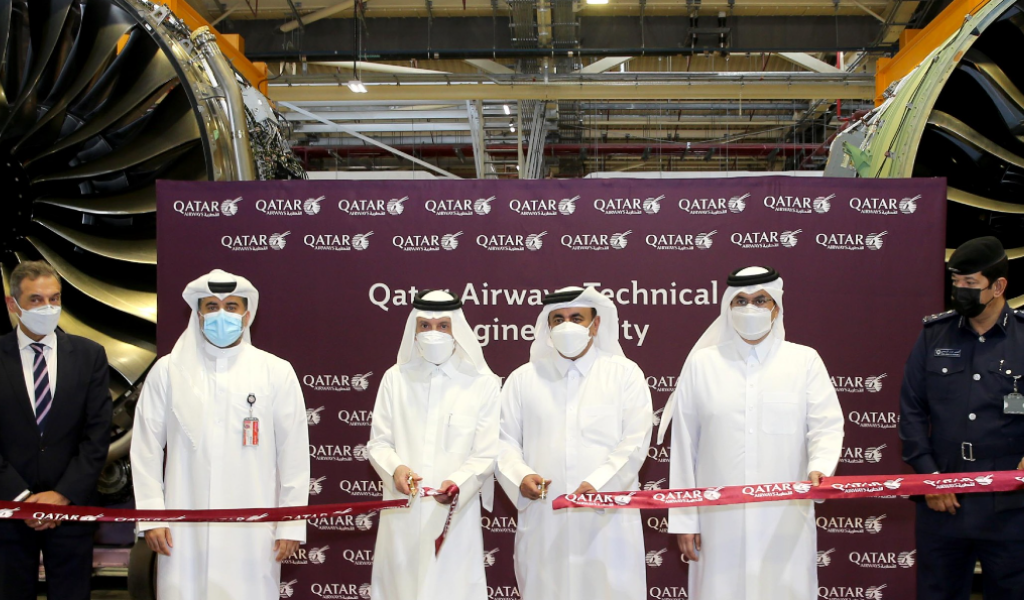 Cutting down Technical Maintenance cost of one of the biggest airlines in the world by more than USD 2.2 million per year can only be achieved by implementing new state-of-the-art technology. Being at the forefront of bringing in advanced improvements and enhancements to its world-class facilities, Qatar Airways celebrates the opening of a new Engine Facility in the Qatar Airways Technical Maintenance complex.

The vast expanse of the ultra-modern facility stretches to 9,000 sq. ft. and it will enable the airline to improve workflow by over 1,800 man hours per month, or 23,400 man hours per year. The airline can also increase the number of its engine production lines from four to eight covering a variety of aircraft engine types by centralizing its engine production and engine parts storage processes.

In addition to this, the ultramodern facility is able to house a total of 80 engines of varying sizes in a temperature and humidity-controlled environment, with two specialist ‘Dust Control’ rooms to limit the presence of dust and harmful particles, as well as a dedicated Supply Chain area to minimize waiting times for the ordering and transportation of spare parts.

Speaking on the occasion, Minister of Transport and Communications His Excellency Mr. Jassim Saif Ahmed Al-Sulaiti said that despite the unprecedented times and its challenges, the airlines has continued to show resilient growth as an industry leader. “This achievement will boost the ongoing growth of the aviation industry in Qatar and contribute to localising that major industry.” he said.

He also revealed that the State of Qatar will be carrying out several projects in the future to keep pace with all developments in aviation industry, which is one of the most advanced industries in the world, toward a promising future and an advanced country that takes its position among world countries, until reaching the horizons of Qatar National Vision 2030.

Qatar Airways Group Chief Executive, His Excellency Mr. Akbar Al Baker also spoke at the ceremony and highlighted on how the improvement and expansion of the Technical Maintenance facilities is a key element in supporting the airline’s ongoing efforts to rebuild its global network.

“With the new Engine Facility, we have not only created one of the most technologically-advanced engine assembly and disassembly facilities available within the commercial aviation industry to date, but also doubled our engine production capabilities.” he said. “The facility’s extensive dedicated Supply Chain area also means that we have instant access to a ready supply of engine parts and equipment, reducing our reliance on external suppliers and further supporting the reliability and technical capability of Qatar Airways’ fleet of next-generation aircraft.”