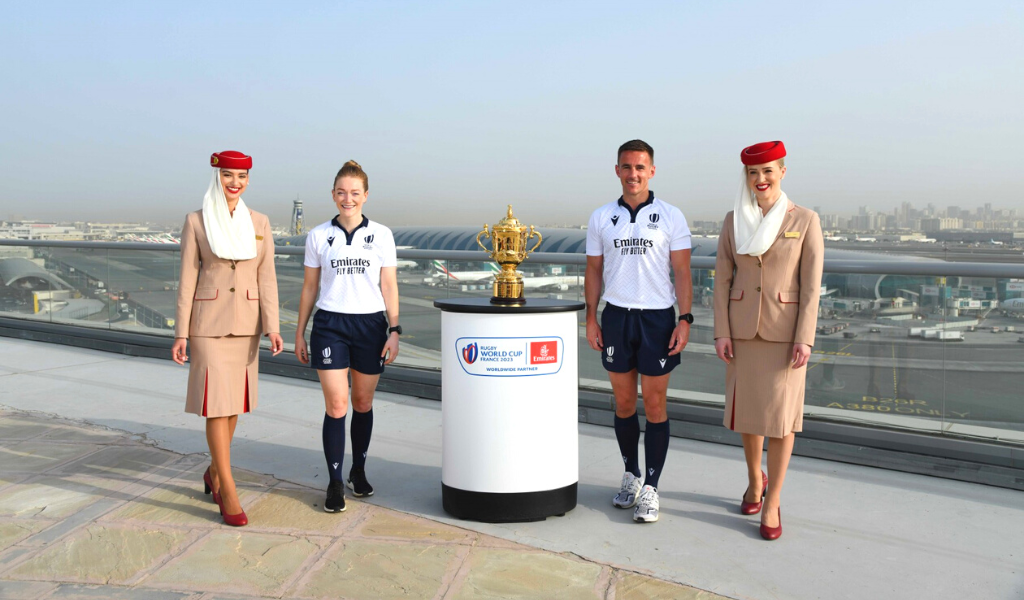 Emirates is also extending its official sponsorship of the Emirates World Rugby Match Officials through to 2027, demonstrating its dedication to the sport and the relationship that has been essential to the growth and success of top match officials since 2013.

Emirates will return to the location of the highly successful partnership between the airline and the international federation that started in 2007 by joining the global family of Worldwide Partners for the Rugby World Cup 2023 in France. As a devoted partner of every men's Rugby World Cup since 2007 and the proud sponsor of the Dubai and Cape Town rounds of the HSBC World Rugby Sevens Series, the airline has since established itself as one of the game's most well-known and active supporters.

Emirates will fly rugby to new frontiers and bring its industry-leading expertise in customer experience to help deliver a truly world-class tournament for visitors traveling to the host countries in its capacity as the Official Airline of Rugby World Cup France 2023 and Australia 2027. As a Worldwide Partner, it will invest in the sport to support its growth in both developing and developed markets. In addition, fans will be able to watch every moment of two unforgettable Rugby World Cups live and on demand from their flight seats, making the sport more accessible.

World Rugby Chairman, Sir Bill Beaumont shared his thoughts on the course, “We are delighted to announce the extension of our long-term and successful collaboration with Emirates for the next two men’s Rugby World Cups and in support of our men’s and women’s match officials programme. Emirates’ global network and passion for our sport will be key in our efforts to make rugby truly global and their proven excellence in customer experience will be an asset to take our fan services to the next level.”

World Rugby Chief Revenue and Fan Engagement Officer, Mr Richard Heaselgrave also added, “Emirates has a global stature as a partner and that is incredibly prestigious for any tournament. For Rugby World Cup, we've had Emirates on board for more than a decade and we’re immensely proud to be partnering again for the next two pinnacle men’s tournaments.

“Emirates’ global operations in most major markets across the world helps us raise awareness of our sport and their belief in excellence is aligned with our own vision of staging world-class events. Emirates is right at the heart of creating events that people want to take part in, bringing fans closer to the action. We are in the business of days out and unforgettable memories. So are Emirates.” Concluded Mr Richard.

Emirates Airline President, Sir Tim Clark also shared some words, “Rugby is a sport with great values and a proud heritage in many countries. It is also a sport that’s attracting more participation and interest across communities each year as we are seeing in the UAE where rugby just made it into school programmes nationwide. We see rugby as a great platform to bring people together under a shared passion for the sport.”

“Emirates has been a proud sponsor of Rugby World Cup since 2007. France 2023 also coincides with Emirates’ 30 years of flight operations to Paris, Charles de Gaulle and considering we now have 31 weekly flights to France, Emirates is looking forward to flying in fans to watch the world’s best teams competing for the Webb Ellis Cup.” Concludes Sir Tim.